Let's get this party started...

While I was away, some really important games were released in the adventure genre. Some in very unique ways. In particular, I am talking about the new Sam and Max series by Telltale Games. Hooray for episodic adventure! When I found out about this in 2006, I was very excited to see what it would be like. This weekend I took my very first spin around the series through Gametap. I love Gametap. Get more adventure titles Gametap! They have a pretty good selection of classic games, as it is...and I will be making a lot of use of my membership for this blog.
Anyway, I decided to compile my thoughts about Episodes 1 and 2 of the first season into one sort of mini-review article. Here are my impressions:

In Culture Shock, Sam and Max get a call from Bosco that there are former child TV stars putting up a video display case in his store. When Sam and Max investigate, they discover that a brainwashing ex TV star named Brady Culture is behind it all. Interesting premise.

Playing through this first episode is what made me remember how much I love adventure games. I was so excited to play a good third-person adventure. I was really impressed that Telltale chose to stick with mouse-only driving. There’s something about keyboard controlling that damps the impact of a deep storyline for me. I did think that the fixed camera angle led to a claustrophobic feeling, but I can understand why they would want to do it that way as it did help me remain focused.

The characters were really well acted, and at times the writing was hilarious. However, the sound on the dialogue was sometimes a little..eh..blurry(for lack of a better word). The quality of the dialogue audio really stood out against the crisp clear music in the background. So that definitely made it more noticable. But, for me, it was a minor gripe. It didn’t make me want to quit playing.

The puzzles consisted of mildly challenging inventory puzzles, and a couple of good dialogue puzzles. It wasn’t at all difficult, but I found that not to be a deterrent. In fact, I think I enjoyed the game so much more because I always had a clear idea of what to do, and the solutions to the puzzles were very intuitive. Not to say I run from a hard puzzle. They were integrated very well into the plot, so I always felt like I was participating in the main plot. They were organized into three themed puzzles that led to a “boss-puzzle”.

Overall, this was a very fun game. It restored my belief that this genre is on an upswing. Subsequently, it made me want to begin this blog. On to # 2.

In this episode a TV talk show host names Myra has trapped the audience in her studio and refuses to let them out. She’s forcing lame gifts on them. I found this very funny. 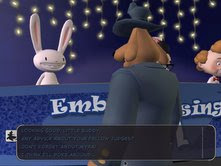 Many of the features I loved about the first episode made an encore appearance in Situation Comedy. There were also some improvements. The sound issue with the dialogue from the first episode was totally improved, so that was one less distraction. 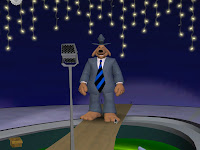 The situations and puzzles in this episode were more fun, I thought. The TV studio parodies of popular TV shows were hilarious. So the puzzles are arranged in this episode, much like the first episode. There are three tv themed puzzles that lead up to the boss-confrontation puzzle with Myra.


Overall this episode felt shorter to me, but that might just be because I recognized a pattern and I did less exploring of the environment. 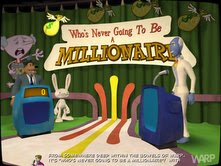 I want to play more of these. I intend to play them all, but my next blog will be about revisiting one of my favorite older games The Last Express...