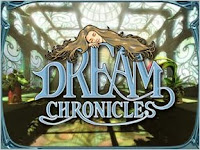 Dream Chronicles 2: the Eternal Maze came out recently, and I’ve been wanting to play it. But I decided to replay the first Dream Chronicles and I feel it deserves it’s own entry.
Published last year by Play First Games, Dream Chronicles is an interesting casual game that has an adventure feel.


You play as the human character Faye who has awoken to find the entire town is under a sleeping spell cast by the evil Fairy, Lillith. Faye’s husband has also been abducted by Lillith because she wants to make him her own husband. Faye has to solve puzzles in a series of beautiful settings. 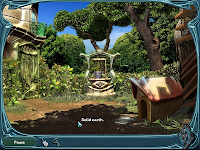 You never actually see Faye, because the game is in First-Person Perspective. The game is linear. Basically, you find yourself in a room, and you must solve a logic puzzle 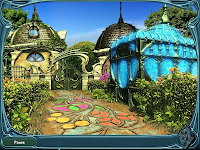 to move to the next room/area. Often the game requires you to find the pieces first in a hidden object style puzzle. Then you move on with the new inventory to complete the logic puzzle. After you move on your inventory is cleared and you start fresh for the new area. The combinations of the puzzles, first-person perspective, and the eye-candy settings reminded me a lot of the Myst series, however none of the puzzles are very difficult and most can be solved in 5-10 minutes.

There is also a collection minish-game going on. Through out all of the scenes are hidden gems forged by different fairies. When you find a piece, the game gives you a little blurb about the fairy that made it and their personality. I have to admit it was almost the most fun part of the game for me. It feels like a mini-game, but it does matter in terms of your overall score at the end of the game. 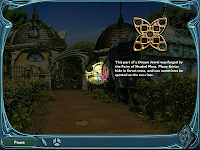 Overall, this Dream Chronicles was very fun. I’m happy I played it. It’s cool how you can submit your score to a global server to see how you rank. I’m not really sure I could play it as many times as it would be required to beat the top ranked players, but I do think I will replay it when I’m in the mood for something short and pretty.

Dream Chronicles is available as a download almost anywhere that distributes casual games.

Happy Adventuring.
Posted by Banderwocky at 9:39 AM