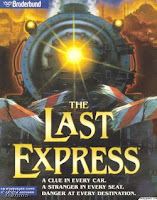 Ahh. One of my favorite gaming memories involves The Last Express. Published in 1997, it was such an innovative game, despite being a bombastic commercial failure at the time. It’s too bad that people really didn’t seem to know what they were missing. So I was very excited to take a trip down memory lane to replay this title.

I think biggest strength of this game is the story. The setting is wonderfully historical. The year is 1914. The plot is completely fictional, but sort of a history lesson of the events and tensions that led up to World War I. I’m quite a sucker for historical fiction. It’s like under-the-radar learning, and I always feel like I can benefit from knowing more.

The main character is the very handsome Robert Cath. Sort of a Byronic Hero, he has a dark past that is alluded to in telegrams he gets from a friend asking to join him on The Orient Express as it journeys from Paris to Constantinople. However, when he arrives on the train (through somewhat shady means), he sees that his friend, Mr. Tyler Whitney, is as dead as it gets. Robert Cath has to think fast to avoid detection. From here he decided to assume Mr. Whitney’s identity and get to the bottom of the murder. 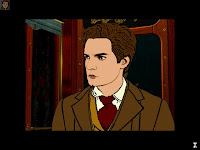 Many details back up the plot. There are lots of little optional articles that you can read in the newspapers, and some of the telegrams and other items belonging to the passengers help elucidate some of the events going on in the world outside of the train. But the main glue holding the tightly-rendered plot together is the characters. They are brilliantly written, well-acted, and consistent right down to the way they sit, stand, and look at each other. The high quality voice-acting does not disappoint. 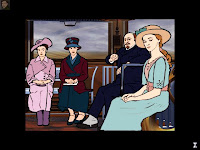 The visual style also helps set the perfect atmosphere for this kind of story. The graphics are in the style of the Art Nouveau movement that was contemporary in this 1914. Through rotoscoping and post-production processing, the characters have been rendered in the style of paintings made by Henri de Toulouse-Lautrec and Alfons Mucha . I felt as if I stepped inside one of those immortal images. It is an off-beat style of graphics that has yet to be used so stylishly. It gives this game a timeless appeal.

In addition to the great voice-acting, the rest of the audio is exceptionally well done. The ambient sounds are high quality and the music is stunning. There is a place in the game where a concert is given, and the music really is beautiful all the way through. 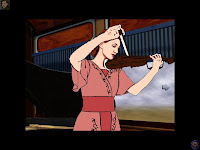 Along with the unusual graphics the pace of the gameplay is also an innovation. All of the action takes place in real time. So it adds greatly to the realism of the game. It’s great how this makes the game replayable. It does, however, make the game all about being in the right place at the right time, and certain conditions must be met or you will have to rewind the game 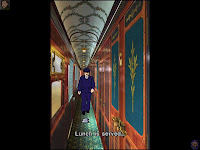 to a pre-determined point to try to solve the problem. Which leads me into…

With the plot being so linear, and the requirement of having many “do-overs” to get things right sometimes, it can get frustrating. Also there are a couple of timed puzzles...which I think are the devil. I think most adventure aficionados would agree there. However, it’s not that big a deal. While mildly annoying, these do not affect the overall wonderfulness of this game. And here’s a good walkthrough over on Gameboomers that can help you be almost everywhere at the right time to do everything, and overhear all of the conversations.

This was even better than playing it the first time. It’s been about 11 years and this game is just as stunning as the first day it came out. What really saves it is the art style. It’s kind of a shame that there will not be a sequel, as it was clearly set up for it. That, and Robert Cath is totally yummy, and I would have loved to see him again in another game. :(

I’m happy I replayed this game.

I played this game on Gametap, but you can also find it on GameTZ or used copies on Ebay and Half.com.

Posted by Banderwocky at 9:17 AM

I loved playing through The Last Express. It was pretty short, took me 4-6 hours, but it was a great 4-6 hours. I think the thing that they did right with this game is that the world felt alive, and very aware of your presence, which is fairly rare adventure games. I felt like everyone in the game was watching me, and responding to my actions, and I really responded to that.