(Murder In) The Abbey

It must be hard to be a man of reason set upon a breeding ground of superstition to conduct a murder investigation. That is the case with the protagonist of (Murder in) The Abbey, Brother Leonardo de Toledo. The setting is medieval Spain at a Franciscan monastery, Nuestra Senora de la Natividad. The gatekeeper, Anselmo, has been murdered and Leonardo and his novice, Bruno have arrived to gather evidence for the abbot. The abbot wants Leonardo to search for clues that it is the Devil or a demon. So armed with his trusty crucifix and his less-than-brilliant sidekick, Leonardo sets out to gather empirical evidence and thus the investigation begins. 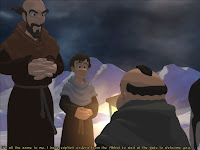 ure Company in August 2008. It’s the first game I have played by Spanish developer Alcachofa Soft. One of the reasons that piqued my interest was the animation style. For the subject matter, which is very drama-oriented, utilizing a comic almost Disney type style was an intriguing concept. I think doing this game the usual way with photorealistic style, would have been cliche and the game wouldn’t have stood out to me. It’s the same reason I was taken with the early Broken Sword games. Secondly. I loved the movie The Name of the Rose, which is an adaptation of the book of the same name by Umberto Eco. This game draws heavily from this influence and to give props to Eco they name an important character after him. So lets get to the good and bad:

For me, the music was one of the best features in the game. Every area had it’s own orchestral score and there were a lot of choral tracks. The songs fit the scene nicely, in periods of exploration the melodies were minimal and relaxing and in parts of action the music would crescendo and support the feeling of excitement. It was just right. The graphics were beautiful. A mix of 3D characters with 2D rendered backgrounds. The effect was of a cell-shaded cartoon. It was pulled off in a very polished way. Sometimes the lighting was gorgeous. 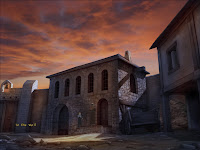 nsitions like sunrise and sunset). And inside all the areas the light would also change it’s quality according to the time of day. Most of the puzzles were inventory-based, and for the most part they were logical. There were a couple of harder more mechanical puzzles. The voice-acting, for the most part, was very high quality and added greatly to the polished feeling of the game.

For the first quarter of the game, it felt polished and wonderful...if a bit slow. I don’t mind a slow game as I like to relax and immerse myself into the game world. Then I started to notice the problems.

First off, there is a misleading inconsistency with the exit points of the scenes. The environments are 2D, so you get a screen with multiple exit points. I got stuck at a point, thinking I explored the whole of the game world, when I discovered that on a couple of screens you have to physically walk to the edge of the screen to move about. This would not be so confusing if I hadn’t done it another way in other scenes of the game. I was very confused by this for a while. 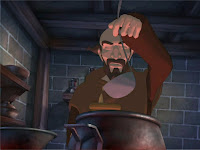 Then, there is a situation with details being too easy to overlook. I don’t mind pixel hunting, though it never adds fluidity to a game experience. The problem with The Abbey, is that in some scenes inactive items from previous scenes, become active. I just don’t think to look at things I already looked at. I prefer to see the active items, and not know their use yet to overlooking them because I they didn’t light up last time. This also had me wasting time...in a slow game. Add it all up and that’s not good. 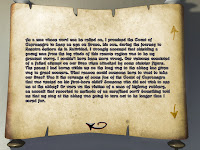 My greatest pet peeve of all was the journal. I like that they included a journal, because often there were hints in it if got hopelessly stuck, and it also served as a useful reminder of what I was doing in my last sitting. It was in the later parts of the game that I noticed that the journal does not hold your place. So you have to do a lot of clicking to get to the relevant parts, especially in the later parts of the game. Usually I was frustrated when I would consult the journal anyway and this just made it even more irritating.

Remember that polish I was taking about? With the dialog and the art? Well it isn’t quite as good as all that because it’s undermined by bugs. Sometimes the wrong bit of dialog plays, sometimes a bit from an entirely different character will play instead and it totally pulls the player out of the game. There are some other minor bugs that just take the shine off. 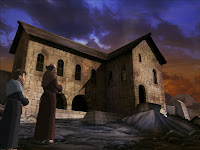 Okay, I know all that just sounded really bad, but I am in a critical mood. The game is not all that bad in comparison with other games in this niche of adventures. I wish they would release a patch for it, it’s so close to being good, but at this time, I would say it’s acceptable. If your really into investigative story games and history I would say check it out. If you are a first-person puzzle lover, this is not the one to break your streak with.

There are some other opinions on Adventuregamers, Just Adventure, and Gameboomers.

Next Up: Casebook Episode 1
Posted by Banderwocky at 8:10 AM

Thanks for another interesting review! Funnily enough, "Alcachofa" the name of the company who made this game means Artichoke!