The Path feature at Adventuregamers

Adventuregamers.com has a very interesting feature on The Path. It looks so different. I really want to play it soon.
Posted by Banderwocky at 2:35 PM No comments:

Free Mini-Adventure over at Double Fine

Host Master and the Conquest of Humor is an old-school point-and-click style adventure mini-game extravaganza. It's been posted all over the net by now, but I just had a chance to play it. It's pretty awesome. Especially if you are a Tim Schafer fan, like myself. Go check it out!
Posted by Banderwocky at 12:58 PM 1 comment:

Sucked into Faunasphere. (It's a good thing)

Ideally, I would like to get at least one adventure title reviewed every week for this blog. Last week was kind of off, because I got sucked into beta testing the game my husband just spent 2 years of his life working on. It's really, really cute and I can't freaking stop playing it. I'm not just saying this either; I'm actually surprised. I mean, I knew it would be a good and cute game, I just wasn't aware of how much compulsion would arise in me while playing it. I guess this is a good thing.

It's only in a limited private beta right now, but if you want to check out the website there's an overview and some cool concept art.

Anyway, I'm also playing Dead Reefs and hopefully will have an article up about it in a couple of days.
Posted by Banderwocky at 1:48 PM No comments:

Adventuregamers. com has an interview up with Aaron Conners and Chris Jones. For those who don't know, These are the guys who brought us the amazing Tex Murphy series. Their game Three Cards to Midnight is currently in development.
Posted by Banderwocky at 5:00 PM No comments: 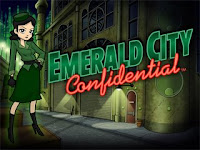 Oz is just not the same as it was when Dorothy blew into town and landed her house on the Wicked Witch of the East. The culture of Oz has faced down the threat of the Phanfasms and the resulting war brought about an Oz-wide ban on magic without a license. The prohibition on magic has fueled fiery underbelly of Oz with bootleggers of magic items and other proponents of corruption.

This is the world of Emerald City Confidential developed by Wadjet Eye Games and published by Play First last month. This is my first time playing a Wadjet game and overall it was really enjoyable. 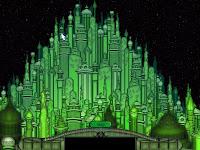 The art style was great. Cute cartoon characters on an art deco-ish background. Every part of the city had it's own color palette just like in the books. Petra was a really adorable character for such a hardened ex-military detective. The devs really took the time to be detailed with the animations. For instance, Petra is in a fitted skirt, so they animate her riding side-saddle on a horse, like a lady should. It was a great detail, and one I think could have been 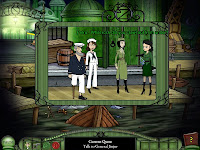 easily overlooked. There is also a collection mini-game that rewards the player with concept art sketches of the characters.

The writing was very, very good. Honestly....I can forgive a lot of things for good writing. After all, narrative is the whole point of this genre as far as I am concerned. ECC is funny and I chuckled out loud several times. It's quite linear, but for me that isn't a problem at all. I very much enjoyed the new versions of the characters and their background as to how they ended up where they are. The female characters are strong and interesting, which I always consider a bonus.

Gameplay was straight forward and pretty easy. Mostly inventory-based puzzles. Petra sometimes casts magic spells and they are actually items you use from the inventory. It reminded me of Zork: Grand Inquisitor (I think, it's been a while) The puzzles are logical and there is an in game hint system if you just aren't feeling it or get stuck. Being published by Play First, Emerald City Confidential does feel more casual compared to some of the more hardcore, puzzley adventure titles I have played. I didn't really mind this at all. It let me focus on the story and was relaxing to play.

This game sounds great, for the most part. The music was very well done and never seemed to get in the way 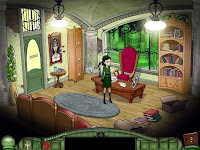 , though I did turn it down a little to hear the voices more clearly. Speaking of the voices, the voice-over work is top notch. My one gripe here is that they voice files are over-compressed and they sounded a bit low grade. I assume this was to keep the download size smaller, but actually I'm not sure why. I would have enjoyed higher quality voices and would have spent the extra hard drive space on it. It would be cool for Play First to give an option here.

My other gripe is the ending. It feels very abrupt. It's also quite predictable and could have been a bit more challenging. Even though it sort of undermines the satisfaction, it doesn't cast a shadow over the whole experience.

Overall, I have to say I really enjoyed this. It was an adorable story and felt pretty polished. I can tell that a lot of hard work went into Emerald City Confidential. This game makes me want to play the other titles in the Wadjet Eye Games catalogue. But don't take my word for it. There are more reviews at Game Set Watch, Adventuregamers, Gamezebo. 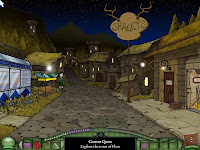 This game is only available as a download from Play First.
Posted by Banderwocky at 1:20 PM 2 comments:

Last Express Cutscenes as a Cartoon?

Kotaku is reporting that all of the cutscenes of The Last Express have been edited together to make a cartoon. It lasts 75 minutes! You can read more and see the cartoon at Kotaku.
Posted by Banderwocky at 12:33 PM No comments:

So yesterday, instead of wrapping up Emerald City Confidential like I should have done, I decided to once more plumb the depths of trying to install the famously difficult-to-install-and-play DOS game, RIPPER. It has Christopher Walken, Burgess Meredeth, and Paul Giamatti in it! The last time I tried to install it was in 2000. I gave up then. Yesterday, I remembered why.

However, now there are a lot more resources for people trying to run these very stubborn games. A great site I found is the VOGONS: Very Old Games on New Systems forums. Advice from this site helped me figure out how to get the installer patched and running under DOSbox. I spent the first half of the day attempting a popular VDMSound method that didn't work for me at all. Anyway...after a lot of cursing and frustration I finally did get the installer working and the game installed. Now I have to tweak it to see the interactive bits...but the hard part is over, I think.


Update: RIPPER is up and running full screen with sound. :D Thanks VOGONS!
Posted by Banderwocky at 7:57 AM No comments:

The new installment of Casebook came out yesterday. You can read more about it at AdventureGamers.

As far as I know, this is only available at the developer's official website for now. It costs 15 bucks.
Posted by Banderwocky at 3:45 PM No comments: