Agatha Christie: Evil Under the Sun

Poor Poirot. He can never seem to get away for a personal holiday. Mystery follows him everywhere. And so it has to Smuggler's Island, the setting of Agatha Christie: Evil Under the Sun.

Released in October of 2007 Agatha Christie: Evil Under the Sun (EutS) is the third game in the series designed by Lee Sheldon for aWe 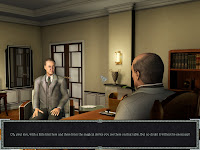 Games and published by The Adventure Company. I have played one other game in the series, Agatha Christie: And Then There Were None, which I didn't enjoy, but I still wanted to give this game a try. I'm glad I did.

The setting is Smuggler's Island just off the coast of Leathercombe Bay. A popular spot for wealthy Brits to get away from the hustle and bustle of mainland life. Among the vacationers is the popular actress, and unfortunate murder victim, Arlena Stuart. What unfolds there is a spontaneous mystery that plucks the famous Hercule Poirot out of his relaxing vacation and plunks him right into a whodunnit with all his fellow guests on holiday.

The story of EutS is told in a very interesting way. Basically the events are being told from the memory of P 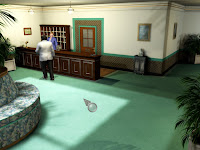 oirot to his friend Hastings as a way to pass the time during an air-raid curfew. The character the player plays is actually Hastings, playing through the memory of Poirot. Sometimes, Hastings will say something Poirot never would, and a funny conversation will happen of camera between the characters. It added a levity that the last game in the series I played did not have. It was welcome. In my opinion, it's always good to chuckle a bit during a serious game.

It helped, too, that the voice acting was top notch. All of the sounds in the game were good. The ambient sounds supported the scenes without being too noticeable. The music was very well-composed and suited well to every scene. 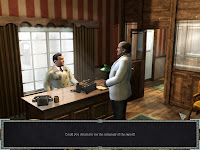 Poirot as a character was very well modeled and animated. And he put his hat on and off depending on whether he is in or outdoors. The other character models in the game were very good, but they were animated poorly. Most of the walks were very strange looking, like they had a stick up the rear. And when they talked they could have used a lot more facial expression. 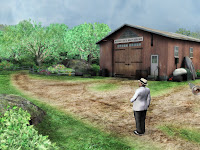 The background art in the game was fabulous. It was immersive and beautiful. The island was fun to explore and I never felt like it took too long to get anywhere because the player can double-click warp to the next screen. Kudos for that!

The puzzles were average. Some of them were really interesting. I got concerned the devs would put a maze in there, but we were spared that sort of thing. In fact, Poirot humorously refuses to go galivanting about. This made EutS much more enjoyable. 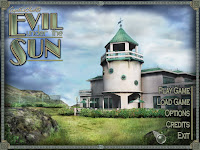 Overall, I liked it. I wouldn't say it's a classic, but it's definitely worth a try. I played this game on my Gametap sub, but you can purchase it just about anywhere games are sold online and they also have it at Big Fish Games and The Adventure Shop.

There are some other reviews at Adventure Gamers, Just Adventure +, and Gameboomers.

Happy Adventuring.
Posted by Banderwocky at 11:27 AM