This year marks the 10-year anniversary of the release of Amerzone: The Explorer's Legacy. I decided it might be fun to take a little time playing through all of B. Sokal's games. Up until this point, I've never finished one. So it will be fun to play through them all and write them up.

At the start of Amerzone, the player makes their way up to a tower wherein resides Alexandre Valembois, former explorer of Amerzone. He has been making some recent attempts to gain grant money to travel back to Amerzone. Upon entering his home the player finds him gasping at a table. He's been clinging to his last breath to charge the next comer by with a quest. The egg of the white birds must be returned to Amerzone. Many decades ago, he took the egg to show off to the European scientific community, and it made him a laughing stock. Unfortunately, his removal of the egg was the beginning of Amerzone's problems. Since they discovered it. One of this fellow explorer's and friends, Antonio Alvarez, has become a ruthless dictator there and the people and culture have withered under his grip. Can the egg help to reverse all of this loss and despair? 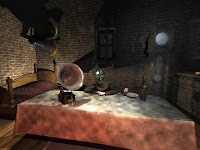 The English version of Amerzone was first released by publisher Casterman in October of 1999. The Microids developed title was also released to the Playstation console at a later date. Even though the game is 10 years old, it is still a worthy play. The graphics are very good. It is a little foggy looking during the video parts. Still, the scenery is delightful to behold and the environments are fantastic. I loved all the strange creatures I encountered. The game is point-and click and entirely in the first-person perspective.

The puzzles are either inventory-based or light mechanical puzzles. They are not overly difficult. The challenge was just right, I think. There are only a couple of times where exploring the 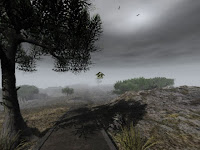 environment feels like a bit of a maze, though not an outright maze. I didn't enjoy those parts, but fortunately they are not protracted.

The sound in this game really takes the cake. The soundtrack is nice and unobtrusive, and the environment sounds are perfectly executed. Good sound really matters in making an experience enduring. I feel like the age of the graphics is offset by the clarity and appropriateness of the ambient sound.

There is very little character interaction, which I usually dislike. This time the world is so alive with creatures that I feel the absence of human characters very little.

One of the focal points of Amerzone is the Hydrofloat. It is an amazing vehicle that is a boat, helicopter, plane, submarine and sailboat. It is fun using it to access all the different parts of the world.

The game is short, which I didn't expect. However the ending is poetic. It all adds up to a satisfying experience that is more fun than challenge. 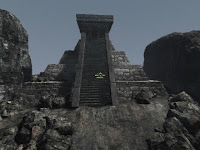 I traded for my copy on GameTZ, but this game can still be bought in stores and is available for download on The Adventure Shop. I also love stalking ebay for older titles like this.

There are some more in depth reviews at Adventuregamers, Just Adventure+, and Gameboomers.
Posted by Banderwocky at 12:16 PM